Manu Cornet drew his way through a tumultuous year at Twitter. His cartoons depict the experience as no other medium can.

Just like that, Manu Cornet’s time at Twitter was over. The prolific cartoonist and software engineer watched his services disconnect and laptop go blank in a meeting on Nov. 1. Less than a half hour later, he learned he was out, an early cut among the 3,700-plus Twitter employees who lost their jobs this month.

Cornet’s time at Twitter was brief but well illustrated. With dozens of cartoons, Cornet depicted the feeling inside as Elon Musk acquired the company. As the person behind some of the tech world’s best-known cartoons — including an all-timer on big tech org charts — Cornet was perfectly placed to document the wild 2022 Twitter experience.

Now suing Twitter, Cornet isn’t speaking publicly, but he did give Big Technology permission to reprint his Twitter cartoons (which he calls “twittoons”) with attribution. So this week, let’s highlight 11 illustrations that illuminate Twitter’s recent past as no other medium can. 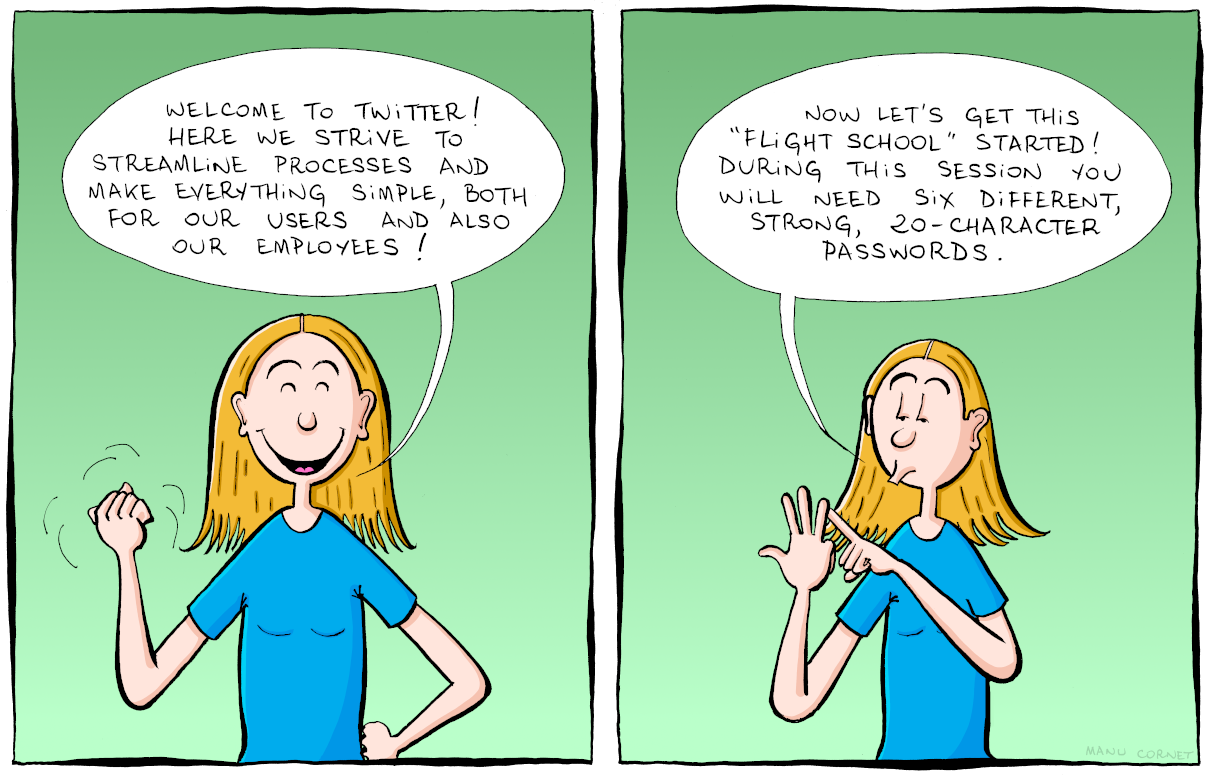 Cornet began his Twitter career poking fun at the company’s inefficiency. He saw some of its processes — in this case, disorganized password management — and was not impressed. Twitter is a slow-moving, red-tape-filled company that’s struggled to ship products over the years. Cornet is learning why. 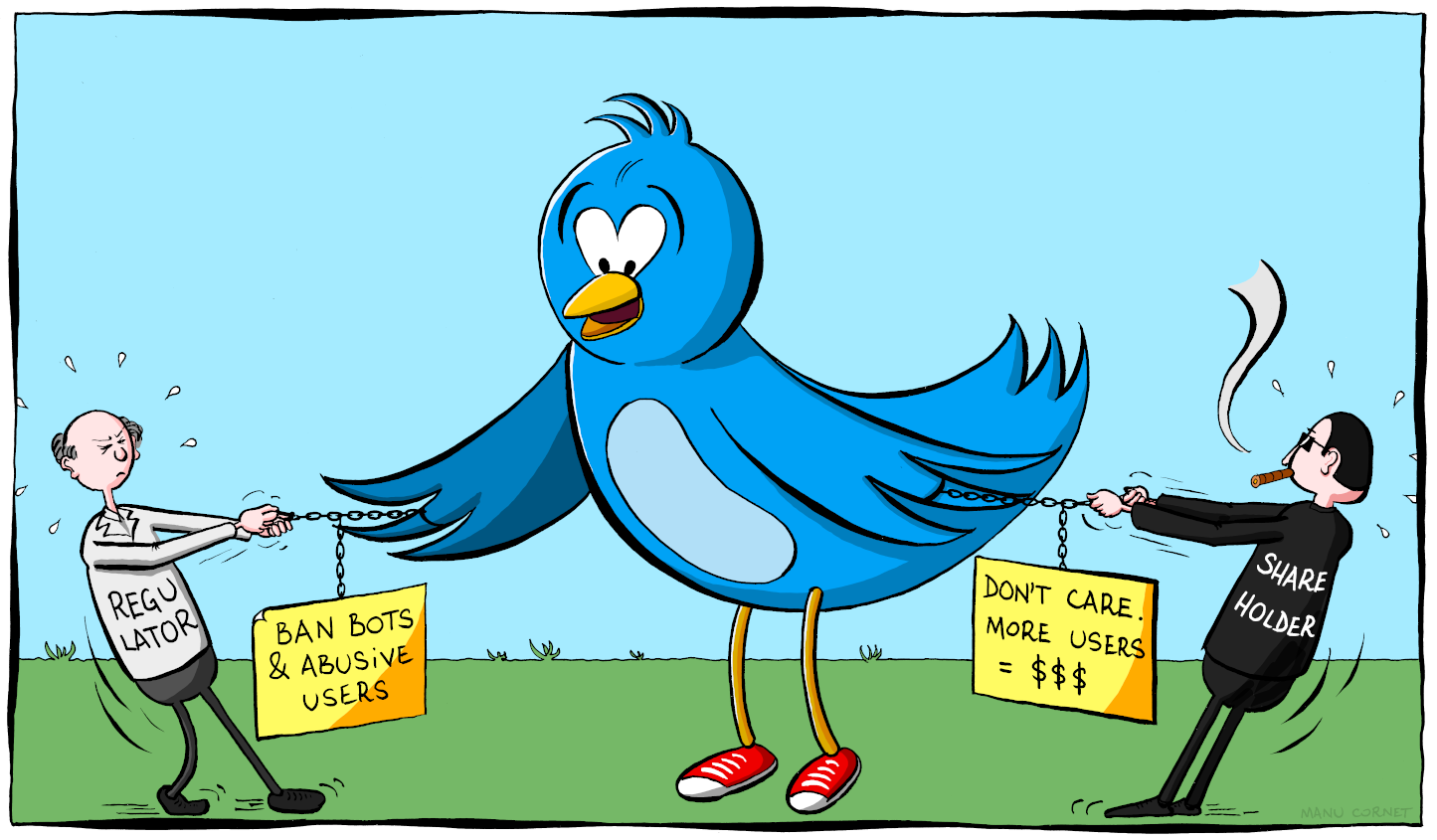 Musk hasn’t yet entered the picture but Cornet identifies Twitter’s impossible balancing act early on. The service is filled with bots and abuse, but the market wants the associated engagement. So it’s stuck in the middle. 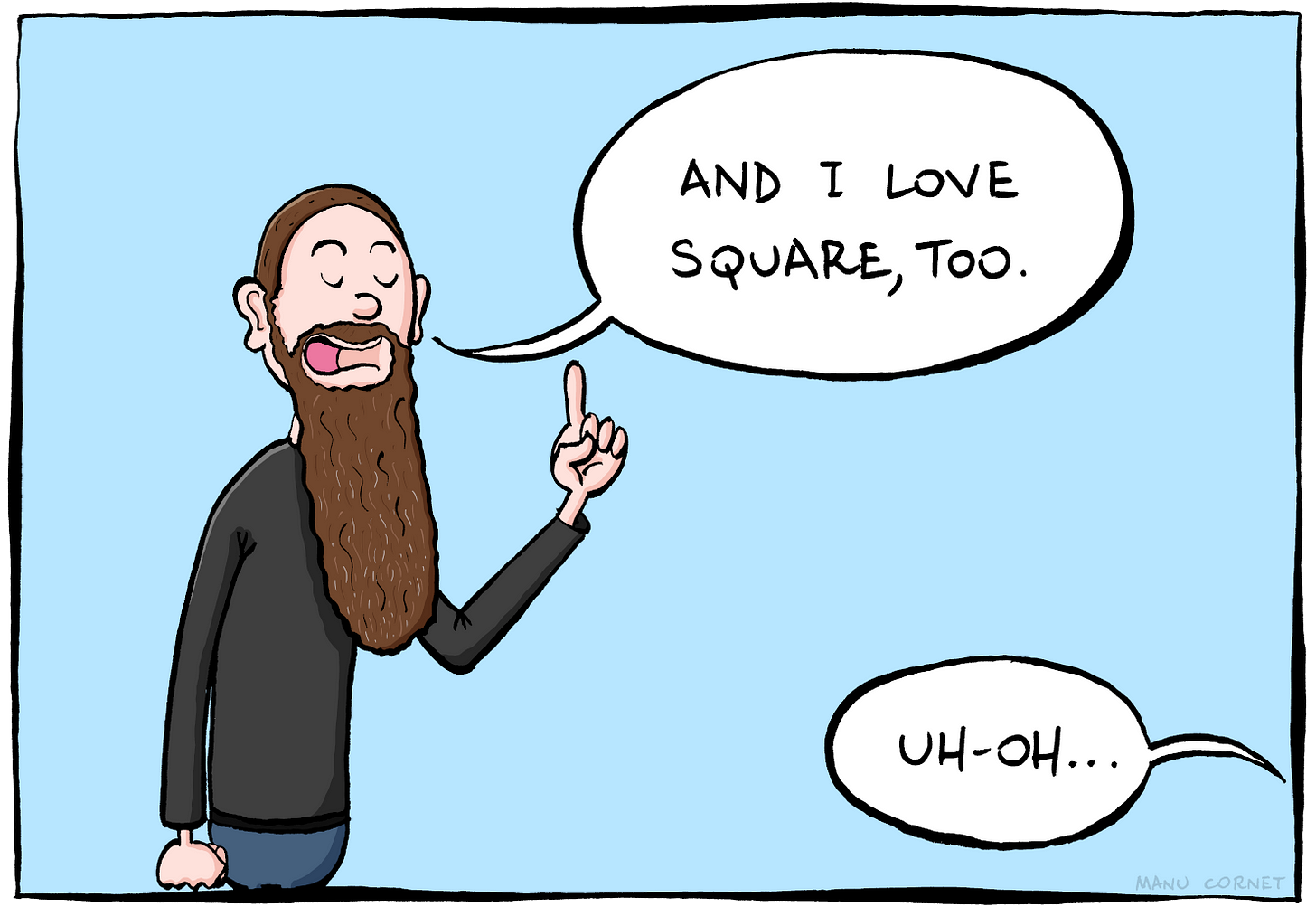 Jack Dorsey resigned from Twitter on Nov. 29, 2021. The next day, Cornet pokes at his dual loyalty to Twitter and Square. The “UH-OH” is telling. There’s a sense of, what comes next? Cornet and his colleagues will soon find out.

After Parag Agrawal takes over as CEO, Cornet points to a lack of vision. His cartoon from this era indicates Twitter’s priorities are vague yet still accompanied by an urgency to demonstrate progress. Big changes are on the horizon though. 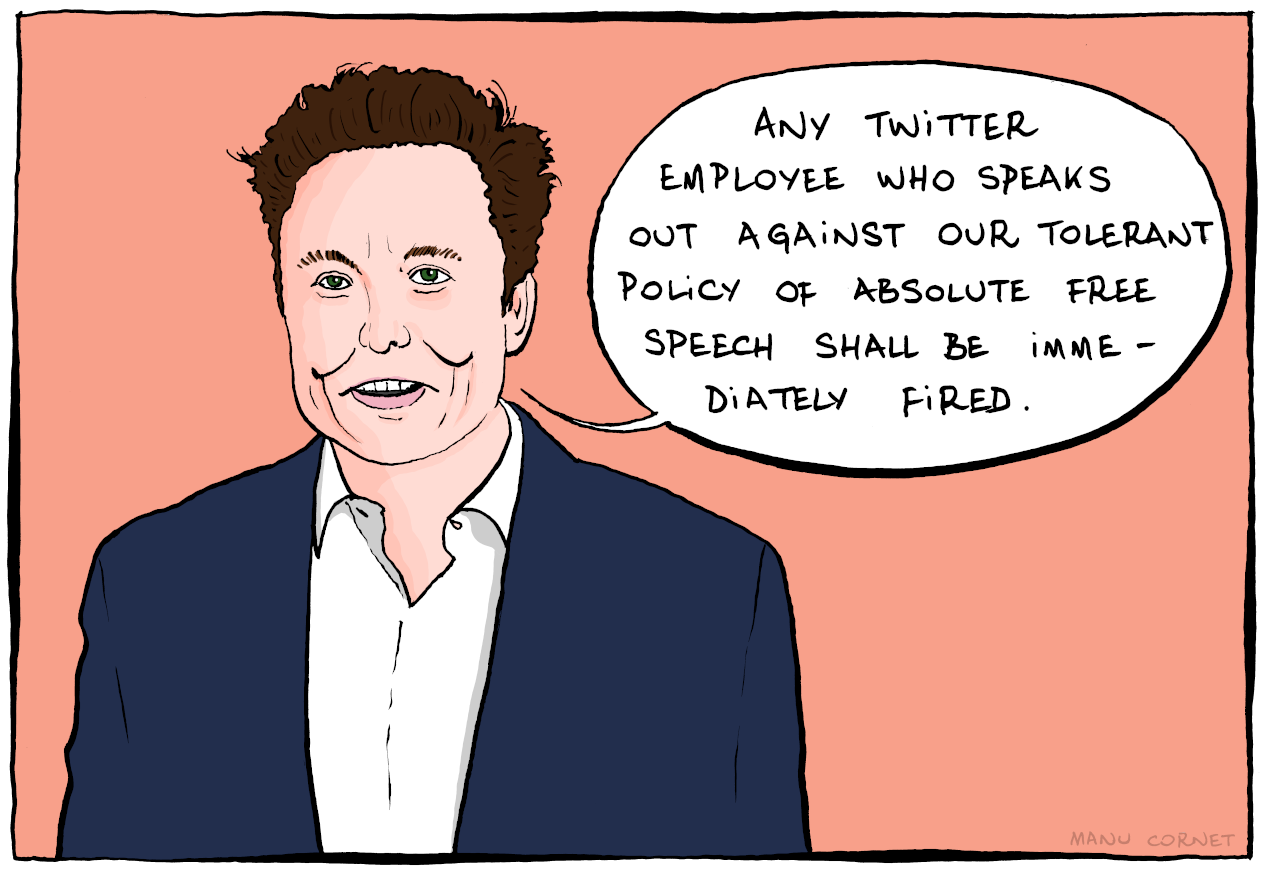 On April 4, 2022, Musk announces he’s become Twitter’s largest shareholder after acquiring 9% of the company. On April 5, he’s offered a board seat. On April 7, Cornet previews the impending culture clash between Musk and the company’s employees. 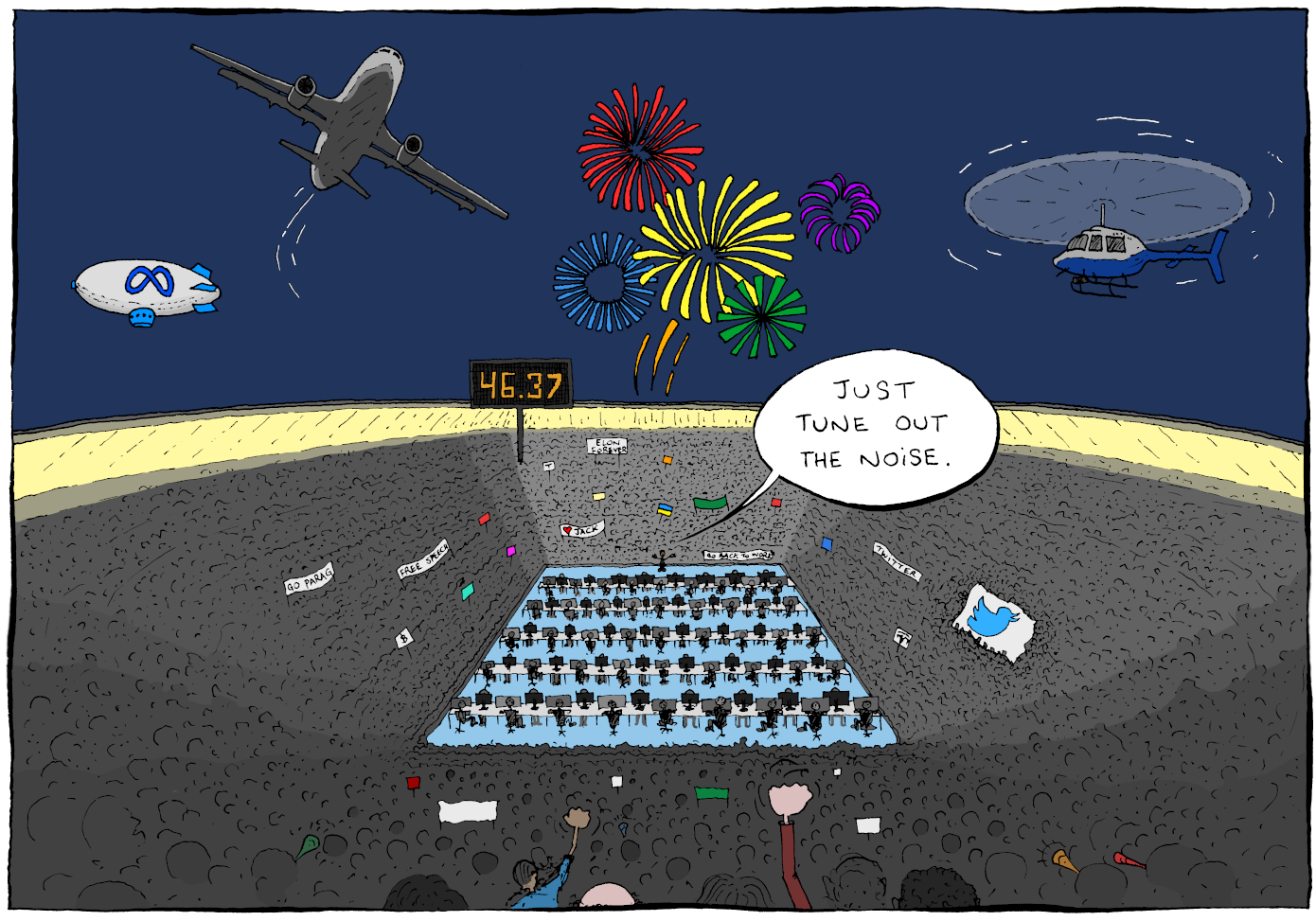 Musk makes an offer to buy Twitter in April 2022. Meanwhile, management urges Twitter employees to tune out the noise and focus on the work. This cartoon, which Cornet draws a few days later, perfectly depicts the absurdity of that request. 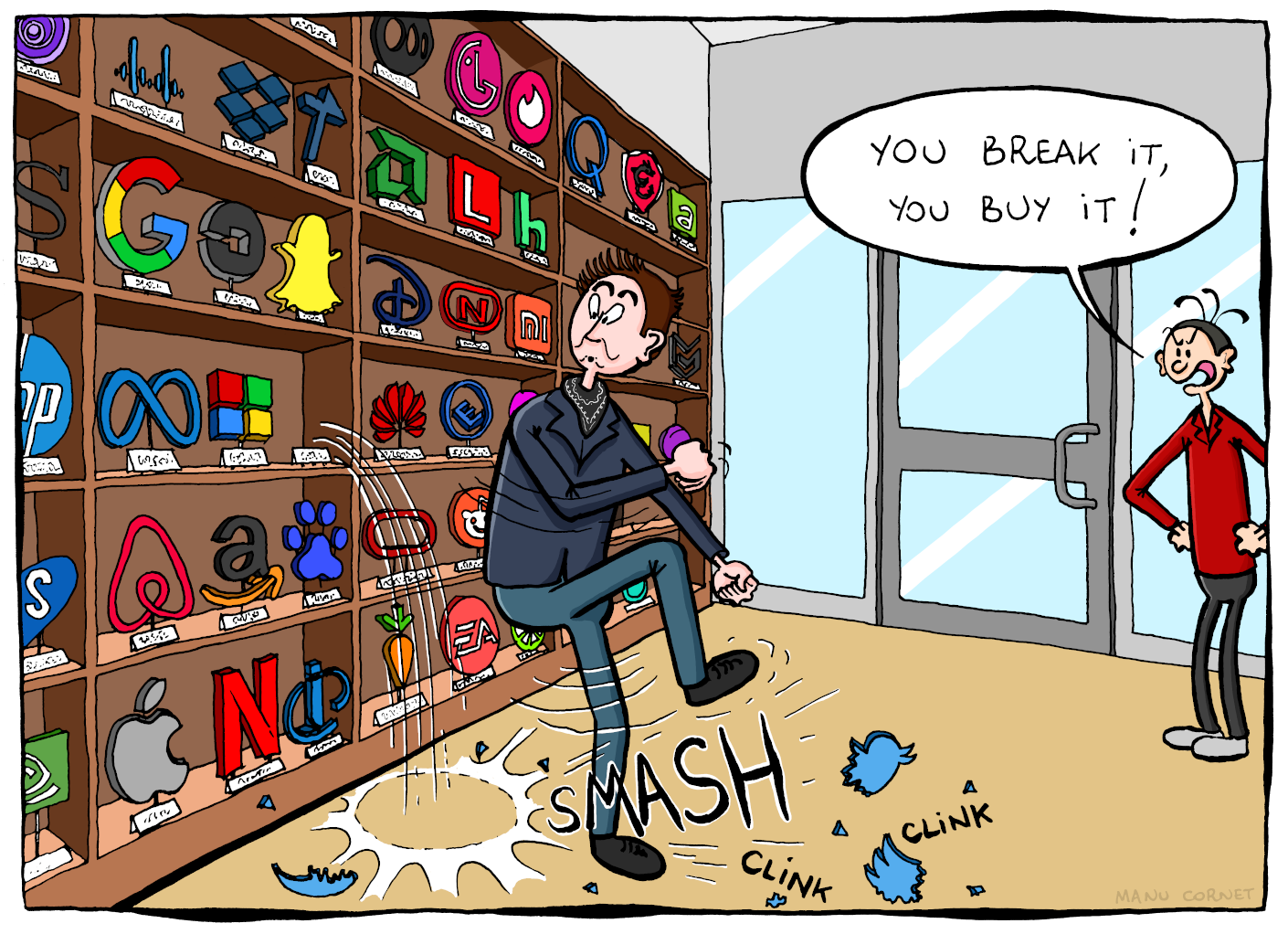 After signing a deal to buy Twitter, Musk declares he no longer wants to go through with it. Cornet imagines him being forced to complete the transaction in this cartoon. He’ll later hand Musk a signed copy with a note, “I hope you don’t mind a ‘court jester’ at Twitter or you’ll have to get me fired.” Musk will later take him up on that offer. 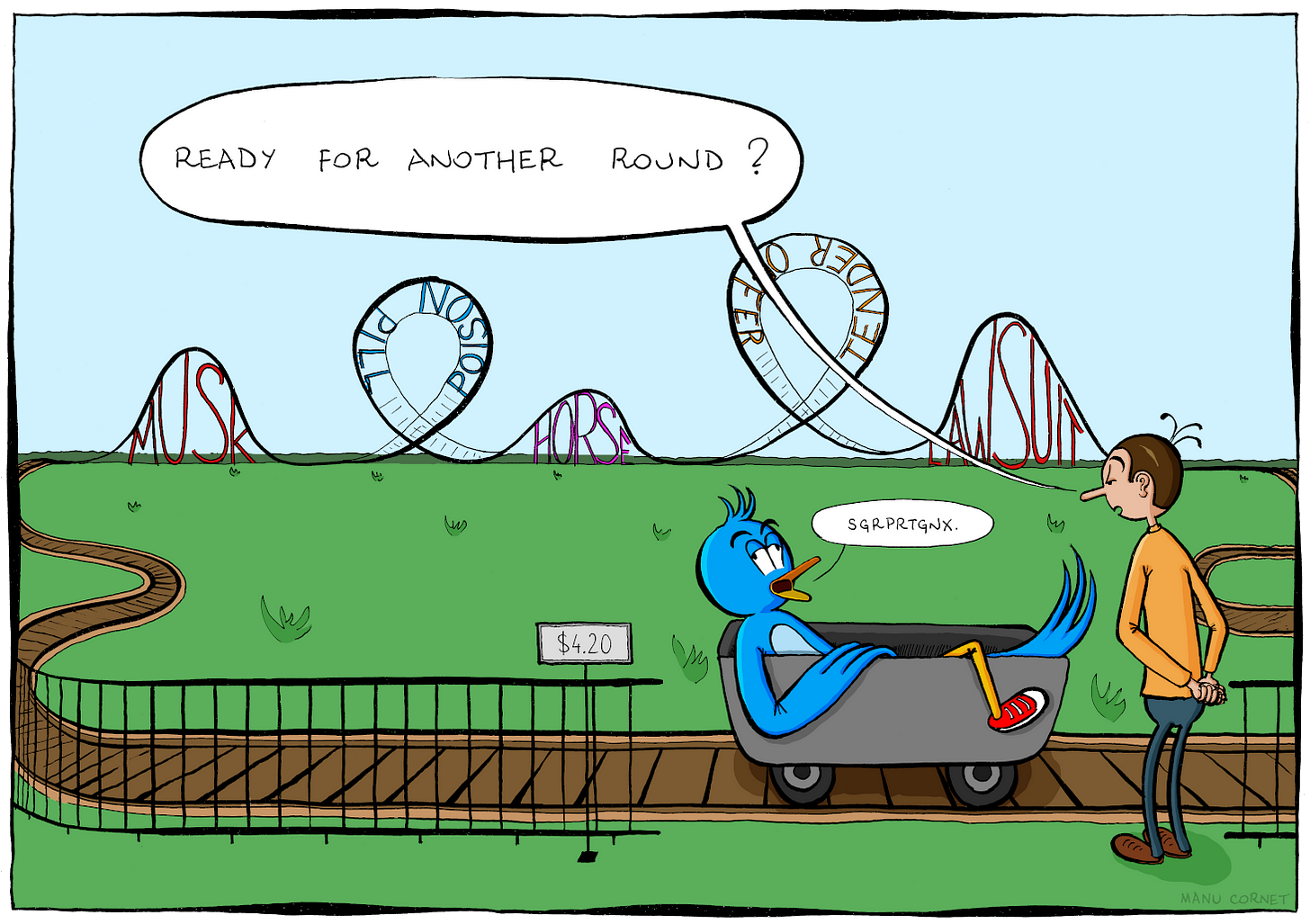 As the court case plays out, life inside Twitter gets dizzying. Like the rest of us, employees have little idea when this will end. 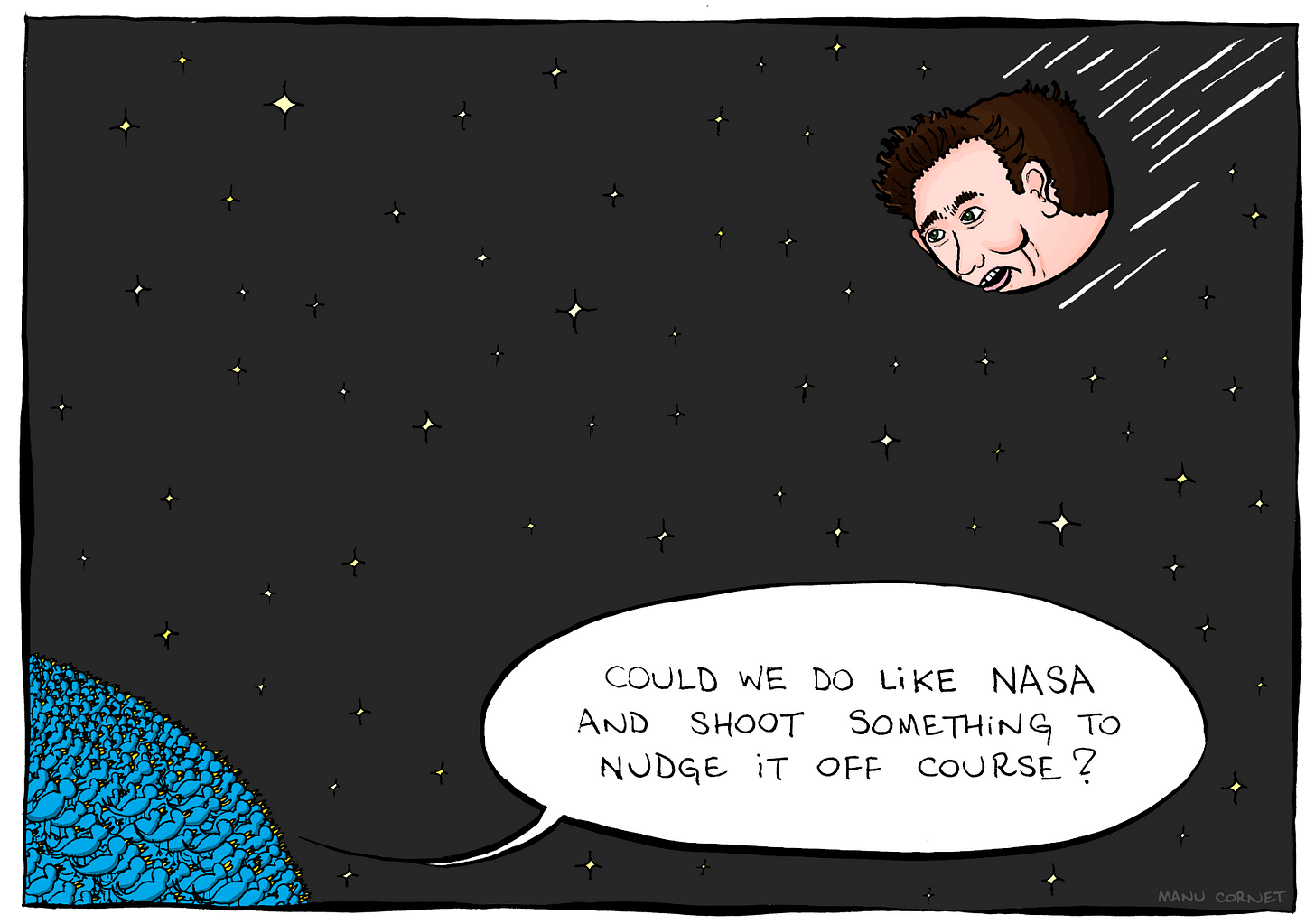 Musk agrees to go through with the deal in October and hurtles toward Twitter at rapid speed. Employees have a good idea about what’s coming. 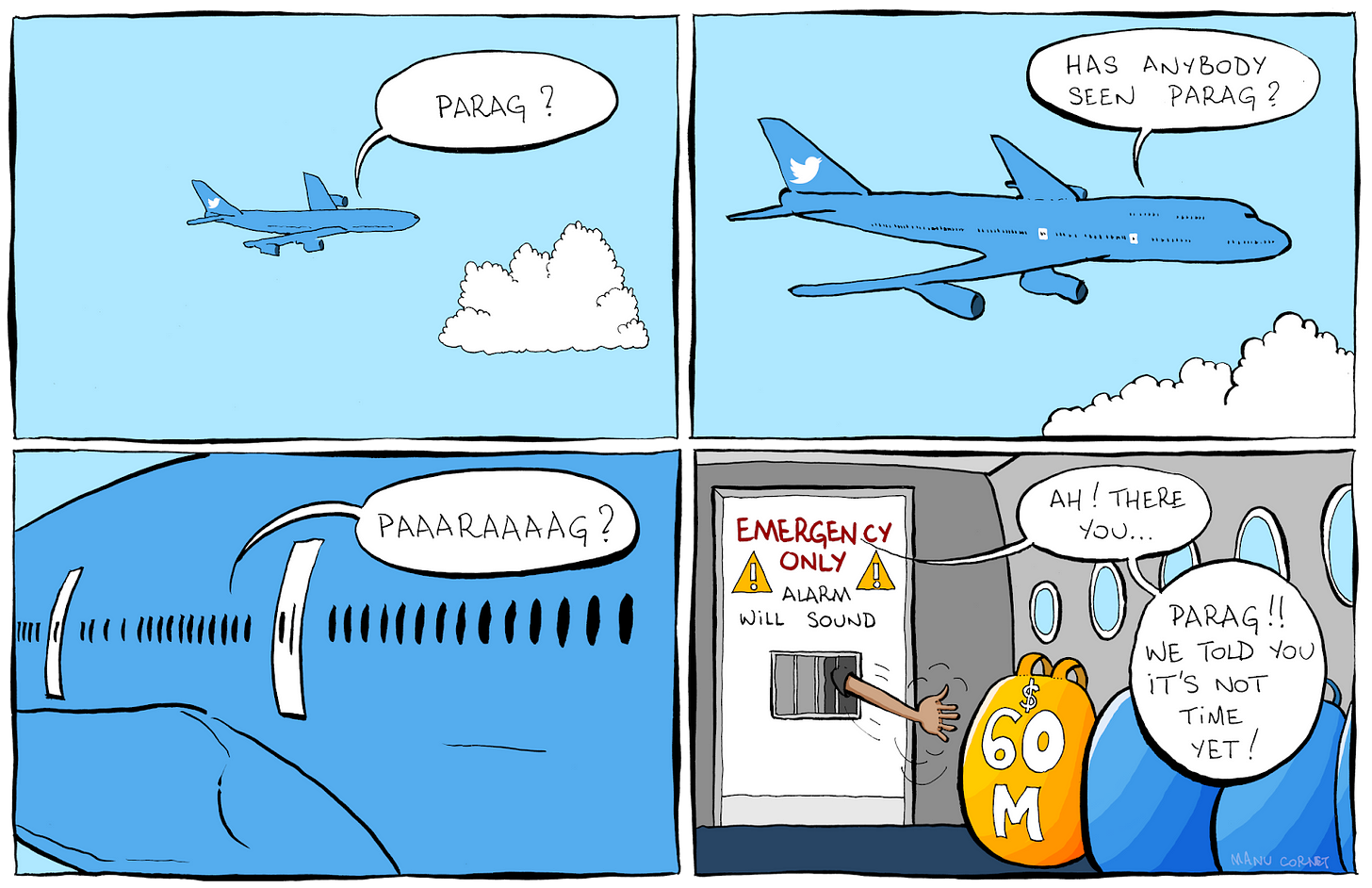 Twitter employees have heard frustratingly little from their CEO. There’s a sense he’s hunkering down and waiting to collect his massive severance package. 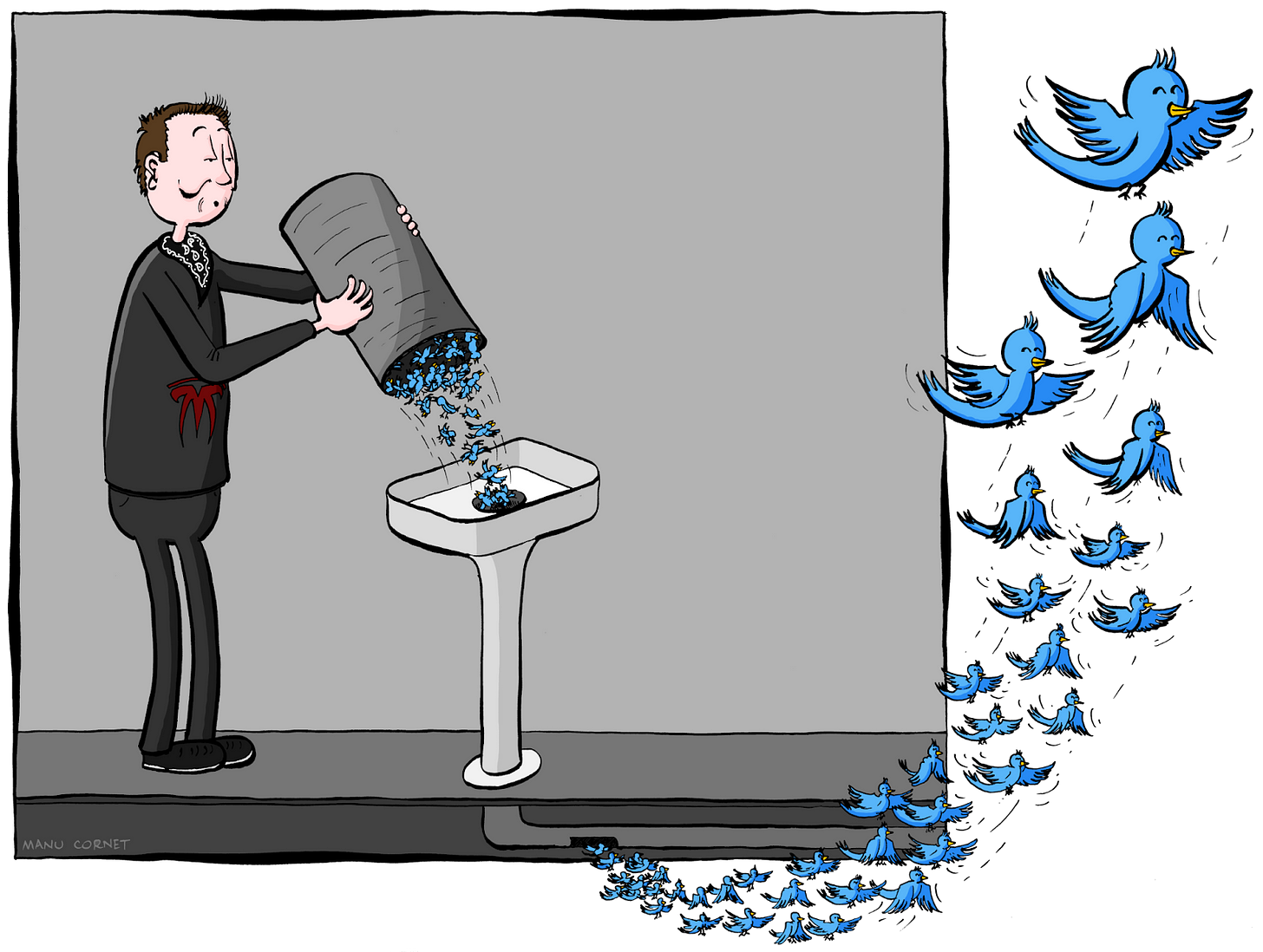 Musk acquires Twitter in late October and walks into Twitter HQ with a sink. Soon after, he’ll send Cornet and 3,700-plus of his colleagues down the figurative drain. As Cornet imagines it, it’s not all bad.

Musk is now in control of Twitter and rapidly shipping products, features and policies. This is nothing like the bureaucratic company Cornet walked into last year. Musk may still do a good job with the company (as I highlighted previously). But Cornet’s comics are worth highlighting either way. They show the human side of this story, which can get lost easily.

The Ecosystem of Customer Experience Data

What Goes Into Building a CX Team?

How to Use Google Trends to Make Online Money in 2023

Are You Ready for 2023 CX Disruptors?

We will be happy to hear your thoughts

Recent Posts
About us

Mobile-fun.shop is a participant in the Amazon Services LLC Associates Program, an affiliate advertising program designed to provide a means for sites to earn advertising fees by advertising and linking to Amazon.com